Top
Shred God (by Rafe)
Sweetheart (by John B)

1 • 1
Topper Thornton is one of the main characters in Outer Banks. He is portrayed by Austin North.

Topper is the king of The Kooks. He is athletic and is a nationally ranked surfer. Topper is very wealthy and considers himself to be of elite status, and often comes across as entitled. For this reason he is disliked by The Pogues. He frequently behaves violently towards them and attacks them on a number of occasions.

He is in love with Sarah and is rather possessive towards her, despite them not being together anymore. He has his own struggles, often feeling as though he is not good enough, due to his mother's harsh treatment of him.

Topper has a strained relationship with his mother. She blames him for everything and is often very hard on him. Topper hates The Pogues, but the reasoning behind the feud between them is never fully highlighted. However, this is most likely because of his friend, Rafe Cameron, who is shown to have a deep hatred for them. For that reason, he believes that they are bad and he is often manipulated by Rafe and Kelce. He considers them to be beneath him in terms of wealth and status.

At the beginning of Season 1, Topper is happy because he is dating Sarah Cameron, whom he loves. He often hangs out with his best friends, Rafe Cameron and Kelce.

Topper gets possessive and suspicious about Sarah when she disappears for a night (with John B). He catches her with John B and pushes John B off of a tower, severely hurting him.

Sarah breaks up with Topper and he is devastated. He holds a big grudge against John B and when John B is framed for the murder, Topper initially helps the police try to find John B.

At the end of Season 1, Topper discovers Sarah with John B in the middle of the manhunt. He tells her he is going to prove how much he loves her, and he runs out in John B's red sweatshirt to distract the police while they getaway. The police take Topper to the police station for questioning.

Sarah and Topper dated for a long time before the series started, and they had professed their love for one another. He was often possessive over her and worried not only for her well-being but also about her interactions with other men - particularly, John B. Their relationship drama was stirred up by Wheezie, Sarah's younger sister, who planted doubt in Topper's minds about Sarah's faithfulness. This led to Topper interrogating Sarah every time they were together. She eventually couldn't take it anymore, which is around the time she grew closer to John B. She did cheat on Topper with John B as the two kissed and hung out under the radar despite her still being with Topper. When Topper found out he was furious with Sarah and lashed out, calling her a whore and refusing to see reason. He got drunk and confronted the new couple which led to John B falling off of the bell tower and breaking his wrist. Topper and Sarah didn't talk for a while, however, he remained bitter over the way things ended between them. In an attempt to prove his love for Sarah, he disguised himself as John B so the real John B and Sarah could escape the police.

In the second season, Topper saves Sarah from being drowned by Rafe, by hitting him in the back of the head.

Topper is of average height, preppy, with straight blonde hair. He is considered attractive. He has a muscular build as shown in "The Forbidden Zone." 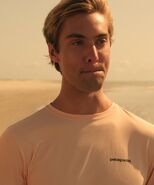