Sarah Elizabeth Cameron is one of the main characters in Outer Banks. She is portrayed by Madelyn Cline.

She is the stunning, vivacious queen bee of OBX, alongside her golden-boy ex-boyfriend Topper. Sarah comes from the Kook world and is frequently scorned by The Pogues for her reputation as a princess but there is more to her than meets the eye. She is quick-witted and warm-hearted and despite the odds she catches the eye of John B, becoming involved in an unforgettable adventure.

Sarah grew up on the wealthier side of the island in Figure Eight and thus is considered a Kook. Her father is a self-made entrepreneur and built the family business from the ground up. Sarah describes him as being like John B when he was younger.

Sarah has an older brother, Rafe, and a younger sister, Wheezie. She lives with her father and her stepmother, Rose, with whom she has a relatively strained relationship. She is close to her father and says that she can't imagine life without him.

In the ninth grade, Sarah was best friends with Kiara, but the friendship ended abruptly when Sarah began to feel claustrophobic in the friendship. She has had a number of boyfriends in the past but no relationship ever lasted. This, Sarah tells John B, is because she finds herself pushing boys away whenever she starts to get serious with them. Prior to the pilot she started going out with Topper, who is also a Kook. Sarah is interested in the environment and has an easy-going and fun-loving attitude.

At the beginning of Season 1, Sarah is dating Topper, another preppy Kook. He tells her he loves her but it's obvious that her heart is not in the relationship.

John B convinces her to go on an adventure as part of the hunt for the gold, and she goes because she seems bored and wants some excitement in her life. She ends up really enjoying her time with John B and they kiss at the end of their adventure after John B confesses his feelings for her.

She ends things with Topper and starts to date John B. She helps him with the hunt for gold and her father even takes him in, to get DCS off his back. Eventually, Sarah realizes her father is not who she thinks. Ward frames John B for Sheriff Peterkin's murder. Sarah desperately tries to set the record straight because she sees that her brother Rafe is the real murderer. No one believes her, so she helps John B run away and they escape on a boat together.

The boat capsizes and they almost die until a passing ship saves them and offers to bring them to a nearby dock so that they can continue their escape. They find a boat and they let them aboard. They eventually learn that they are headed to Nassau, The Bahamas, which is where Ward Cameron sent the gold.

In the second season, Sarah and John B are in the Bahamas trying to lay low. After John B goes for the gold at Ward's house, he gets them in trouble and Ward finds out that his daughter is still alive. Sarah is shot by Rafe and temporarily "dead". Eventually, they make it back to Charleston. She texts Wheezie but is instead found by Rafe who tries to drown her. She and John B get in a fight after Ward blows himself up on his yacht and temporarily break up.

Topper comforts her in the mean time, especially after her father's supposed death. Later on, Sarah and John B reunite and get back together. In attempt to get the keys to the truck with the cross inside, Sarah is drugged and kidnapped by Rose. She is then brought aboard the boat where she discovers her father, Ward, faked his death. She tries to escape and is caught by her father who tries to kill her but is stopped by John B. The Pogues and Cleo make it out of the boat on a lifeboat and decide to stay on an abandoned island.

Sarah often finds herself fighting an inner conflict: She doesn't know who to trust and has to decide between her friends and her family. Sarah is loyal to her friends, even if it means that she has to disappoint her family. She tries to protect those she loves. She is caring and kind, but she won't let others talk about her badly.

Sarah is smart, loving and enthusiastic. She is energetic and funny.

Sarah and Topper dated for a long time before the series started, and they had professed their love for one another. He was often possessive over her and worried not only for her well-being but also about her interactions with other men - particularly, John B. Their relationship drama was stirred up by Wheezie, Sarah's younger sister, who planted doubt in Topper's minds about Sarah's faithfulness. This led to Topper interrogating Sarah every time they were together. She eventually couldn't take it anymore, which is around the time she grew closer to John B. She did cheat on Topper with John B as the two kissed and hung out under the radar despite her still with Topper. When Topper found out he was furious with Sarah and lashed out, calling her a whore and refusing to see reason. He got drunk and confronted the new couple which led to John B falling off of the tower and breaking his wrist. Topper and Sarah didn't talk for a while, however, he remained bitter over the way things ended between them. In an attempt to prove his love for Sarah, he disguised himself as John B so the real John B and Sarah could escape the police.

Main article: John B and Sarah Sarah and John B are currently married (not legally though). They first interacted when she caught him stealing scuba gear to explore the sunken boat named Grady White. They had a sarcastic behavior towards each other, but began to end that. In Spy Games, they grow closer as she helps him get into Chapel Hill.

Kiara and Sarah used to be best friends in ninth grade, but they had a fall-out after Sarah didn't invite Kiara to a party and Kiara called the cops to Sarah's house. They sort their differences out though and become close friends again, although Kiara doesn't want her to be a part of the team at first and demands that John B chooses between her and Sarah.

JJ and Sarah are friends and they care for each other. JJ and Pope welcomed Sarah into the Pogues when Kiara didn't. Along with John B and Pope, JJ makes a plan to get Sarah and Kiara to become friends again, which works. Sarah knows that JJ gets into trouble a lot and that he never chooses the safe way. They get along well.

Sarah has long dirty blonde hair that falls just below her shoulders. Is white with a light tan. And she is 5’6” (1.68m). Getting her looks from her father, Sarah’s high cheek bones and full lips display her great genetics and give a face to her great personality.

Sarah is often seen wearing shorts, tops or crop tops and some jewelry.

Sarah (to John B): Can we just drop the whole, Kooks versus Pogues thing?

Sarah (to John B): Relax John B, it's not like I've never seen a boy in underwear before... I have a brother, get your head out of the gutter John B.

Sarah (to Rafe Cameron): Why don't you give me a "save the date" on that? You psycho.

Sarah (to John B): Did you just yeet over that chain?

Sarah (to John B): Toughen up, buttercup. 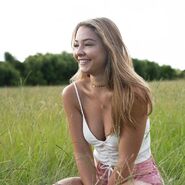 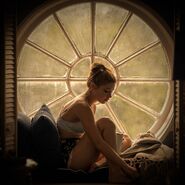