Following a savage hurricane, which effects the whole island. John B, JJ, Kiara and Pope, in other words The Pogues go out in the water exploring. When they stumble across the sunken ship of island resident Scooter Grubbs drama quickly follows.

The Outer Banks is "Paradise On Earth", an island inhabited by two distinct groups – the Kooks and the Pogues. John B is a Pogue, along with his best friends JJ, Kiara and the brains of the operation, Pope. John B’s father disappeared nine months ago at sea looking for a shipwreck but he believes his father is still alive.

The episode begins with Hurricane Agatha unexpectedly saving John B from child services (who wants to place him in foster care because of the absence of a legal guardian). The hurricane smashes through town and causes devastation in her wake. Heading out on their boat, JJ and John B take to the water and manage to convince Pope to defy his Father and head off with Kiara.

In the marsh, they find a small shipwreck, and upon diving down to examine it, find a motel key. Unbeknownst to them though, a dead body washes up on shore of a man named Scooter, who happens to own the wrecked boat. As John B and the others head to the police station to try and report what they’ve found, the aftermath of the hurricane causes chaos to break out in the station and the officers tell them to leave instead.

Using the key, the four friends investigate the motel room and find a map with coordinates toward “The Big Swell”. They also find a number for the safe – 61666. Inside, they find a whole stack of money and a gun. JJ quickly snatches the gun as the police arrive and start snooping around, dipping into the safe and taking the pictures hidden inside while the boys hide outside the window watching this unfold.

After stealing some of the money from the safe earlier, the group discusses what they should do and whether it’s better for them to take it back, especially after seeing Scooter wash up on shore. They don’t do that though and instead decide to throw a party for now, where they meet Sarah Cameron, the rival gang Kooks’ golden girl. Unfortunately, a fight breaks out between the Pogues and Kooks – more specifically John B and Topper which ends with JJ revealing his gun and firing it at the sky to break up the fight.

Sheriff Peterkin speaks to John B in the morning about the wreckage, giving him the option to stay out of the marshes and forget the shipwreck in exchange for helping him with his DCS problem. Thinking it over, John B realizes that may mean the police are hiding something.

Defying the rules, the four decide to head back to the wreck, this time with a scuba tank, stolen from John B's rich boss Ward Cameron. John B investigates thoroughly and finds a black bag hidden in one of the compartments. John B heads back up for air after a close encounter with the deputy, but a rogue boat quickly approaches them on the marsh, housing two shady men with a shotgun following in hot pursuit. Kie manages to stop them with a bit of ingenuity but whoever they are, they clearly do not want that black bag taken.

Back on shore they open it up and find John B’s father’s compass unexpectedly. 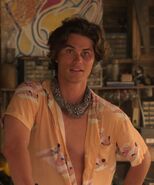