1 • 2
Kiara Carrera is one of the main characters in Outer Banks. She is portrayed by Madison Bailey.

She is an athletic hippy chick with a socialist streak, and although she’d loathe to admit it, she’s from a rich family meaning that she is a Kook. Kiara fits in perfectly with the Pogues; she’s got a cutting sense of humor, a zen vibe, and a taste for adventure.

Kiara is the only child of Mike and Anna Carrera. Her mother Anna was born into money and is from Figure Eight, while her father Mike rose from a less privileged Pogue background to start a very successful local restaurant called The Wreck (where Kie works for her parents). Anna's pregnancy by Mike was unplanned and out of wedlock, which initially jeopardized Anna's financial and social standing - as a result, Anna is extremely protective of Kie and apprehensive about her friendship with the Pogue boys. However, she and Mike happily married and built a very stable, well-off household for Kie with the best possible opportunities, including moving to the Figure Eight and enrolling Kie in the same school all the Kooks went to.

The transition to life and school in the Figure Eight was very hard for Kie; she had trouble connecting with her peers, making friends, etc. However, when she met Sarah Cameron, they struck up a friendship and Kie began to find the acceptance that had eluded her up until that point. Kiara and Sarah were best friends in the Ninth Grade, to the point that Kie neglected her friendship with Pogue boys John B, JJ, and Pope. However, she and Sarah became enemies in the Tenth Grade when Sarah snubbed Kie on the invite list of one of her parties, then spread a rumor that Kie was the reason the party was broken up by police. After having fallen out with Sarah, Kiara reconnected with the Pogues. Shortly after John B involves Sarah in their hunt for the Royal Merchant gold, the rest of the Pogues strand them on a boat together to work out their differences - Sarah comes to an epiphany and apologizes, telling Kie "When people get close to me, I feel trapped, and I bail, and then I blame them for it. I'm really sorry, and I miss you."

In the pilot, John B reveals that he, JJ, and Pope each have or had some sort of attraction to Kiara. Despite a group-imposed "no Pogue-on-Pogue macking" rule, romantic tension between Kiara and John B briefly surfaces in Season 1, and Kiara later has a short-lived relationship with Pope before an amicable breakup in Season 2.

Throughout Season 1, Kiara gets into shenanigans with the Pogues. She helps them on their adventure to find the gold from the Royal Merchant ship wreck.

Kiara flirts with John B and kisses him on the cheek at one point. Later on in the season he kisses her, thinking she likes him, but she doesn't kiss him back and turns him down. Kiara sometimes works at her father's restaurant, but most days is out on the boat or hanging out with The Pogues.

At the end of Season 1, Kiara helps John B escape from the police and leave on a boat. They hear that the boat got caught up in the storm and probably didn't make it, so she and the others mourn John B thinking he died.

Kie, JJ, and Pope carve a heart on a tree in honor of John B, who they assume died in the storm. John B and Sarah are, unbeknownst to them, hiding aboard a boat bound for Nassau, Bahamas. Pope and Kie, naturally outraged, spray "murderer" on Ward's estate walls. Kie even calls out Rafe as a cop killer too.

Meanwhile, she, Pope, and JJ return to school, attempting to avoid the suspicious stares from all in attendance. John B sends the group a photo to certify their survival.

Kiara is a very loyal and caring friend. She often feels torn between the Pogues and her parents, who dislike the boys because they are poor and bad influence. Even though she is one of the more responsible people in the Pogues and usually shoots down JJ's ideas for a better, safe plan, Kiara seems to like the dangers of their adventure.

Kiara is determined and stubborn and doesn't like her parents' ideals, which is why she chooses the Pogues over them.

At the beginning of the series, John B admits that all of The Pogues had a bit of a thing for Kiara. However, Pogue rules dictate that a Pogue can never have romantic relations with another Pogue, thus none of them ever made outright moves on her (no Pogue-on-Pogue-macking). Nonetheless, JJ convinces John B. that Kiara is interested in him because she was particularly caring towards him and kissed him (on the cheek) when he was scuba diving. John B is not fully convinced but is swayed, and impulsively kisses Kiara on the beach at night. However, Kiara reacts awkwardly, and rejects him, using the excuse that Pogues cannot kiss each other. It is unclear throughout Season 1 whether Kiara views John B as a really good friend or as more than that. She brings up the kiss on one occasion and suggests that she only rejected him because the timing was bad.

However, soon after this, John B and Sarah together. Kiara who already dislikes Sarah reacts badly to their relationship and she comes across as jealous, trying to force John B to choose either her or Sarah, she gradually begins to accept their relationship, realizing that the two of them really love each other.

Pope's feelings for Kiara are evident from fairly early on the first season. He watches on with jealousy as John B and Kiara dance together in The Wreck and is angry at Kiara when she focuses mainly on John B and the trouble he is in. He comforts Kiara when she gets upset over John B's relationship with Sarah. He drunkenly admits that he is in love on the night that John B is deemed a person of interest in the murder of Sheriff Peterkin. However, Kiara rejects him and tells him that it can never happen and that they want different things. Pope is angry and the next morning he is cold and distant. Later that day, when Kiara, JJ, and Pope helps John B escape, Pope tells her that he's fine just staying friends, but Kiara kisses him, and when John B and Sarah are deemed missing persons after getting lost at sea, Pope holds Kiara's hand for comfort and they embrace and hold on to one another, devastated.

JJ and Kiara are best friends. They look out for each other and protect one another. They also care a lot about each other, Kiara always being there for JJ when he has to confront his home life, and JJ comforting Kie when her parents aren’t the best.

In Season 2, JJ and Kiara are still best friends. Kie saves JJ at the end of S2 Episode 10.

Kiara's friendship with John B, JJ, and Pope are a point of contention between her and her parents. While her father, Mike Carrera, appears to have been brought up working class, her mother was born into wealth and grew up on the Figure Eight -- and each of them want better for Kie than life in the Cut. There is particular tension between Kie and her mother, Anna, as Anna wants Kiara to experience the privilege and opportunities she did growing up in the Figure Eight, but Kiara has little interest in country clubs or her privileged, wealthy peers.

Kiara has a less strained relationship with Mike, her father, and they seem to spend a good deal of time together as she works with him at his restaurant, The Wreck. He is shown to be more accepting of his daughter's Pogue lifestyle and her friends from The Cut. Mike doesn't like that Kiara is a Pogue, but he understands that JJ, John B, and Pope are Kiara's best friends, and he is a bit more tolerant of them than Anna. He often gives Kie and her friends free food at The Wreck and has even bailed John B out of jail on one occasion. 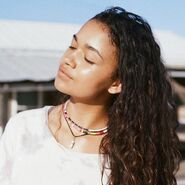 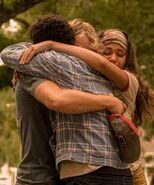 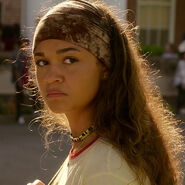 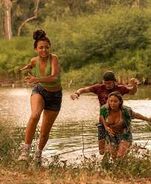