2
Cleo is one of the recurring characters in Outer Banks. She is portrayed by Carlacia Grant.

Cleo is confident, fearless and clever yet also playful and fun-loving. A Nassau girl and a formidable artful dodger, Cleo’s world soon collides with the The Pogues upon their arrival in the Bahamas.

Cleo meets John B and Sarah Cameron on the ship to Nassau. She was a crew member on the boat for Captain Terrance. She, Captain Terrance, and his crew planned on handing John B and Sarah to the police, wanting the bounty that was on John B's head. John B and Sarah escaped the crew. But not for long, They'd soon catch up to the couple, keeping them with them. That was until Sarah Cameron promised Terrance's crew some of the Royal Merchant Gold as it was in The Cameron's Nassau Estate. The heist they would perform, trying to steal the Gold would be unsuccessful. The Cops found the gold on Terrance's Ship and supposedly killed Terrance and Stubby.

While escaping, John B and Sarah would meet Cleo again... When they hit her with a car. Cleo would help the two escape to the marina, where she showed them Ward Cameron 's boat, The My Druthers Too. John B and Sarah would escape in the boat back to The Outer Banks. Not much is known about what happened to Cleo between Homecoming and The Coastal Venture. Other than the fact, Cleo got a job on the Coastal Venture. On the Coastal Venture, Cleo's life would be entangled with The Pogues once again. As she met Pope and they fought for a few minutes before they were stopped at Pope's mention of John B. Cleo would assist the Pogues on their Mission to get The Cross and save Sarah Cameron. Cleo would end up on an island with John B and his crew, where she'd become an Official Pogue.

Cleo is a black girl with long black hair and brown eyes from Nassau. She is of average height.

"Mother of- Heyyy, how'd you make it thru girl?"

"Stowaways? HA! I got a cracked oil pan on a PIECE OF SHIT ENGINE!" 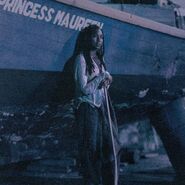